Scroll/swipe up or down over the list to see more show dates.

Comedy Tonight at the Summit Theatre

Dennis Blair is a Renaissance man. He is an accomplished screenwriter, award-winning songwriter and comedic actor. Yet he is probably best known for the caustic observations and musical satires of his live comedy performances.

Early in his career, Rodney Dangerfield made him his protégé, and together they toured the United States and Canada for over three years. Dennis conceived and co-wrote Rodney’s hit movie, “Easy Money”, and also played two cameo roles. He co-wrote and was a featured actor in two Dangerfield specials on ABC, and was creative consultant for the album “Rappin’ Rodney”. The title song (which he co-wrote) was nominated for a Grammy Award.

Dennis toured exclusively with the late, great George Carlin for over eighteen years.

He’s been active throughout his career in other areas, too:

* TV appearances including “The Tonight Show” and HBO
* Winner of the Emmy Award for the animated film, “Confessions of a Standup”
* Two comedy CD’s: “Live Performance Anxiety” and “Words, Music and Drunks”
* Winner of the “Charlie Award” for “Best Comedian in New York”
* Starred in the Los Angeles production of “. . . Also Appearing,” his one-man show about his experiences as an opening act.

Meanwhile, he continues to headline in comedy clubs, on cruise ships and at corporate events and to open for celebrities on tour.

He also has revived his songwriting career, both solo and with his former songwriting partner, John Durkin, recording and releasing an album of jazz originals entitled “Hapless Romantic”, a pop/country collection called “Songs From Captivity” and an album of country-tinged songs entitled “Music from Big Brick”. A song from that album, “I Miss George Jones”, reached the #2 spot on the International Independent Country Music Charts.

All of the albums are on CD and streaming on all platforms. His latest album, “Hold On for Dear Life”, spans musical styles, is available now on CD, and will be on the streaming services in the near future.

And he just finished filming his first ever half hour comedy special at McCurdy‘s Comedy Theatre in Sarasota. It is untitled as of now, but YouTube clips will be appearing in the late summer, with the full special scheduled for release on the open bar comedy website by the end of the 2022. Check back here for details.

Last but not least, he has published his book, “Touring with Legends”, a chronicle of his backstage and behind-the-scenes stories and experiences touring with some of the world’s biggest comedy and music stars, available on Amazon.com and BearManorMedia.com.

Movies, television, radio, theaters, comedy clubs, comedy albums, music albums and award-winning songs, a book, a play…has he had his fill?  “As long as there are jokes and songs to be written,” says Dennis, “and as long as my family demands to be fed, I’ll be around.”

Dennis has been “That First Guy” for plenty of showbiz folks.  For the record, here’s a list of people he’s opened for:

Click/tap "Photo Gallery" card to close.
Click/tap the images below to view galleries. 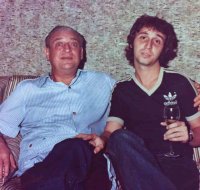 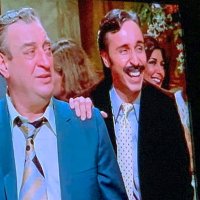 George Carlin (check out the marquee) 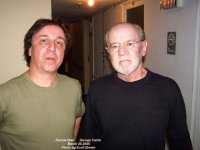 The Composers Showcase, Myrons at the Smith Center, 2022

Click/tap on an album cover to listen.

When he was in his mid-twenties, singer/songwriter/guitar player Dennis Blair parlayed a dreary, dead-end gig performing for inattentive bar patrons into a successful standup comedy career. He took his newly-developed song parodies and comic banter to a late-night audition at Dangerfield's in New York City, hooked up with Rodney, and became both a headliner in his own right.

In addition to opening for such luminaries as Rodney, Joan Rivers, Garry Shandling, Norm MacDonald, Tom Jones, the Beach Boys, Gloria Estefan, the Four Tops, and many others, he opened for the late, great George Carlin for 18 years until George's death in 2008.

This book recounts in detail many of the not-seen-by-the-public "backstage" stories; the funny, the triumphant, the tragic, the weird, the close encounters, the nightmare gigs, the friendships forged, the good times and the bad times that Dennis experienced as a co-worker and a friend to many of the biggest names in show business during those years. It's a testament to how you can never really plan how things will turn out. Enjoy the journey.

Check out Dennis' New Album, "Hold On For Dear Life!"

Click/tap on an album cover to buy.

Please fill in the form below and click/tap "Send." We'll get in touch as soon as possible.